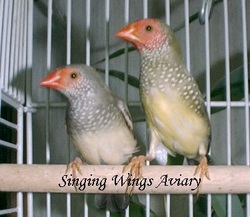 Generally during autumn but will go down any time when they found the conditions suitable.
The nest is usually located in a bush or shrub. The nest is globular about 150mm in diameter and lacks an entrance tunnel. It is constructed from dead grass and lined with feathers.
The selection of a nest site involves an elaborate ceremony. Both sexes sit on the site of the future nest and simultaneously bow deeply with tails twisted. This is followed by pivoting around the perch. Both the parents incubate the eggs and rear the young.

In the avery environment the Star prefers to nest in bundles of bush rather than other receptacles. Because they like to nest close to the ground and preferably in a grass tussock, it would be advantageous to provide these (or some sort of artificial substitute) for nesting. To avoid problems with exposure, Star Finches should encouraged to nest in a sheltered section of the aviary.
Star Finches require plenty of half-ripe seed heads, sprouted seeds and live food to be encouraged to nest.

The Star Finch performs a song and dance whilst holding a grass stem (or simular token) in his bill. The feathers on the head breast and flanks are ruffed and the tail twisted toward the female. This is accompanied by a great deal of bobbing.

The Yellow face is the most popular and prevelant. There is also a pied, fawn, cinamon, isabele and blue mutation.
The pied is not as dramatic as many pied mutations, only causing a ring of white around the mask and white wing primaries and tail feathers. The fawn and cinnamon are simular, from what I understand, with varying shades of brown. This may actually be the same mutation, but is being called by the two names. If it is a "brown" mutation of the Star, it would probably be more appropriate to be a form of dilute. Reducing both the green and yellow colors of the body, but not the red.
The "blue" mutation is not as dramatic as the "blue" mutation of Goudian Finches, but does iluminate the yellow base from the colouring leaving the belly and the back a dark shade of blue.

This species is know to have produced hybrids with the red-cheeked Cordon-blue and Red-billed Fire Finch. Hybrids with Zebra and Crimson Finches have also been reported.

3-6 pure white eggs (15mm x 11mm).
Incubation period: 12-14 days.
The young usually fledge at around 15-17 days. Fledged birds should not be removed from the parents until at least 4 weeks after fledging. In captivity, Star Finches may preduce as many as three broods per year.

Maturity is attained at about 12 months, but these birds are most productive after their second year and continue to be so until about their fifth year. Personal experience indicated that birds as young as 9 months successfully waened clutches of 3 and more.

Disposition: Peaceful, inoffensive, somewhat shy, good in a mixed flight. They may be kept in a colonyh of 3 or more pairs, or as single pairs. They will not tolerate nest inspections and will desert their nest at the slightest provocation.

Description and Mutations: 4 1/4 in (11 cm). Forehead, sides of head, chin & beak: bright red; neck & upper back: grey-green to olive green; wings: grey-brown; belly: yellowish green; rump & central tail feathers: crimson. Spots located on mask, chest & along the sides of the belly.
Mutations include pied (but pied feathers only tend to show on the head & wings (where the pied feathers are yellow), & on the tail where the pied feathers are pink), yellow-faced (where the mask is yellow instead of red), and isabel (a lighter, more fawn version of the bird with the same markings, just in a lighter, browner tone). The rarer Eastern Star Finch (N. r. ruficauda) is the same as the red-faced Star Finch, except it lacks yellow underparts.

Sexing: The visual sexual differences in Star Finches is easily identified as they are dimorphic. The red on the head is more extensive on the male than on the female. On the male the red extends below the mandible onto the chin. While the red on the female does not extend as far back at the sides, and does not occur below the mandible. The yellow on the underparts is usually more intense on the male. When sexing juveniles, it is best to wait until they start to break colour. Young males may be identified by looking flecks of red breaking through on the upper throat under the mandible, whereas young females will have no red breaking through in this area.

Housing & Breeding: House in a medium (at least 30" x 2' x 2') to large-sized flight, preferably planted with a thick bush or two for cover. These birds are fairly social by nature, and so do best when housed with several pair of the same species, or with species of similar demeanor, provided that the flight is roomy enough. They can be bred as a single pair per temperature they are exposed to remains above 60 degrees F (15 C). If in a very large flight or aviary, colonly breeding may also be an option. Their cage should not only be sheltered from the cold, but also from breezes and dampness. Provide half-open nest boxes and large hooded/oval bamboo nests fairly high along the walls of the flight, and provide grasses, coconut fiber, and feathers for nesting material. 3-6 eggs will be laid, incubated for 12-15 days by both parents (as soon as the 3rd egg is laid), and the fertile eggs will hatch. Do not perform nest checks. Make sure to give the parents lots of livefood to feed their chicks soon after hatching. The young can be close-banded at 9-10 days of age, will fledge at three weeks of age, be fully independent at 5 weeks of age, and begin to molt at 8 weeks of age. They will not begin a second molt for another 7-8 months.
In captivity, breeding usually is between March through September, but some may breed at any time.

Foods: A good quality finch mix for their dry seed, Millet, greenfood, livefood.( livefood which is not necessary for rasing babies or breeding) , medicated grit.

Additional Information: Star finch best breeding years are between 2 and 5 years. Their lifespan is about 7 years.


Health Problems Common to this Species: The normal worming (worm away recommended) and anti Coccidia (Cocci-Care recommended) treatments should be maintained throughout the year, as the Stars preference for spending a lot of time on the ground makes it an ideal host for parasitic worms. Overgrown toenails occasionally present problems in this species.

Showing: Star Finches make excellent show birds, providing their flighty temperament can be contained. The star finch is the first bird I won a show with on my first showing. The judges look for richness of colour, an evenness and quantity of spotting, and good quality feather. Care should be taken to avoid scaliness of the beak, feet and legs. Scaliness of the mandible becomes very obvious on the red colour. If the bird is not sufficiently well-trained, it will damage its tail by clinging on the wire cage front.

Description: In the normal form the Star Finch has a bright red face which extends past the cheeks in males. The overal body color of this species is an olive green with a beige-yellow underbelly. Tiny white star like dots cover the the crown of the head circling around the outer edge of the eyes to the cheeks and extending from the chin to the chest then down the flanks. Both sexes have red beaks and dark eyes.

Origin: This species originated and can be currently found in Northern Australia.

Sexing: Once molted into adult plumage Star Finches can easily be sexed visually. The males have a brighter red face mask which extends past the cheeks while hens have very little facial color with no red on the chin. Hens are also a duller grey-green with more white stars under the lower mandible and a beige colored belly while males are more olive green in color with a yellow colored belly.

Mutations/Sub-species: Aside from the normal form of Star Finches a few mutations are available such as yellow face (pumkin face) which chances the red face to orange, pied which give the bird blotches with no color pigment and fawn which changes the overall body color to a light brown color.

Diet: Star Finches do well on a finch mix which includes proso, japanese, german, siberian millet and canary seed. They also need fresh foods such as kale, green leaf lettuce, boiled egg, grated carrot, brocolli tops and chopped spinach. A vitamin/mineral supplement should be added in some form either in the water or on fresh foods. We chose to use Petamine and Wheat Germ Oil Blend mixed in with our "homemade eggfood" in which we give to all our birds. Cuttlebone, grit and fresh water should be available at all times.

General Care: Overall they are a pretty easy species to maintain but may need frequent nail trims.

Compatibility: This species is peaceful and a good canidate for a mixed aviary. They get along with thier own species and other species of the same temperment.

Housing: Star Finches can be housed in cages or planted aviaries of mixed species or their own species. Just be sure the birds you house them with also have a peaceful temperment. Best breeding attempts seem to happen when they are bred one pair per cage or planted flight. They will require heat during the winter at least to 55 degrees and will breed best in 70-75 degrees.

Song: The male's song is somewhat quiet but pleasant. He will puff his head feathers and lean forward while warbling his throat. He will also dance for the hen going from side to side in an up and down motion much like a Gouldian Finch only slower. Below is a short clip of the male. It is a little distorted in sound by the pugnacious Zebra Finches close by.

Breeding: Like most Austrailian Finches the Star Finches breeding season normaly ranges from mid October- March. However they may breed any time during the year if in breeding condition and the right enviroment. They often accept finch size nest boxes, bamboo finch nest or will build natural nest using coconut fiber, sisal, course grasses and feathers. After the male has constructed the nest and the hen accepts she will lay 3-6 eggs which she inccubates for 14 days. The male will on occasion sit with the hen or relive her from her duties for a while. Chicks normaly leave the nest at 3 weeks of age and are weaned by 6 weeks of age. It will take juveniles 4-6 months to obtain full adult plumage. While this species is eager to nest and breed they do not always make the best parents when feeding babies so be sure to supply them with plently of livefood and eggfood to feed the babies. You may also want to have a few Society Finch pairs set up as fosters just incase.